Not sure where I begin, after finishing what feels like the most intense book I have ever read, and probably the one I’ve taken the most away from. Infinite Jest was written by David Foster Wallace in 1996. A few people have asked me to explain to them what it’s about, and from the get go, I was lost for words. It’s not a tennis book, a coming of age book, or any other. The novel is pretty hard to categorise. One thing can be said though, it is definitely an encyclopedic novel, and has a non linear structure.

Currently we are in day ~210 of lockdown as Covid-19 pandemic is still alive and well in Melbourne. I live alone, thankfully still working, so decided now is as good a time as ever to finally pick IJ up off the book shelf. It generally grabbed me from the get go, however, certain story elements and settings, such as the Québécois radicals, the history of ONAN, and Rémy Marathe’s rendevous with Hugh Steeply in Tuscon the most enjoyable. 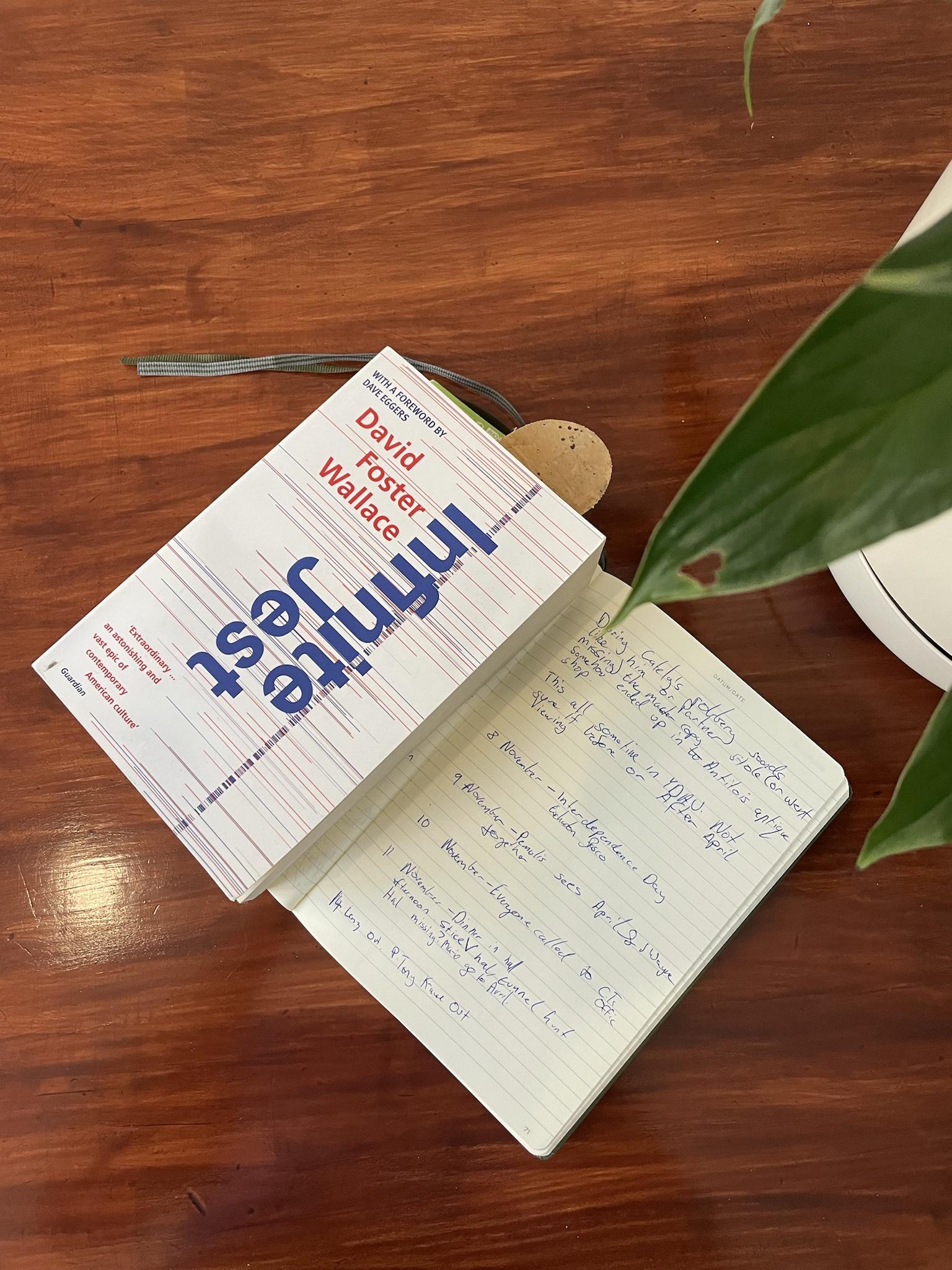 Infinite Jest was also the first book that I ever had to take notes for. I only took a handful of pages, but it’s clear to see why when you search for the book there are photos with copies of the book with hundreds of post it notes. Trying to piece everything together and working different events in with one another chronological was slightly challenging.

Formarlly known as Frequncy Illusion, this phenomenon describes learning a new word or idea, then seeing it again within the next 24 hours. Two factors make up this perception; the first is that of increased frequency, and the second is that it didn’t happen before at the same frequency. In reality, the frequncy hasn’t changed, your attention just was not drawn to it [1].

It happened to me on one major occasion, I had never heard about the political situation in Québéc before, or the independence movement, however, when listening to an episode of the Guardian Football Weekly [2], I was struck and left dumbfoundend when a listener had written in thanking the panelists for their support as he defended his PhD on the political parties of and independences movements of Québéc. A few other scenario’s appeared, especially one where I couldn’t think of the name of a shoe, then remembered they were a pair of Clarke’s Wallabies, only to pickup the book later that same night and see them mentioned (made fun of) in the book.

This really added to the mystique and pull that the book has.

What really happened and my thoughts

The nature of the narrative and the way it’s told by Wallace leaves the ending to interpretation, but there are some pretty convincing and clear theories that I personally believe are meant to be found, and this was confirmed in 1996 by the Author. When I reached the end of the book, a light bulb went off in my head and I found many things to make come together, but I’m not going to pretend I understand it all. Aaron Swartz sums it up well in his theory [3], but there are a couple of points I would like to add.

I think the entire book was meant to be a flashback. The book opens in the Year of Glad with Hal attempting to gain enterance to the University of Arizona, and the chapter ends with the phrase, ‘So yo then man what’s your story’. To me, after concluding reading the book, the rest of it is a flashback and how it got him to this moment.

Swartz states that Orin originally must have been the one to mail out copies of the tape, and that was his bargaining chip to escape the A.F.R at the end. I’m not convinced by this, but I have no evidence to back it up. Hal eating the mold as a child is what made JOI think that Hal could not feel properly, but he does appear to be a lexical genius. There is a clear gap between the events at the end of the novel with Hal experiencing severe symptons just before the Exhibition at E.T.A and his enterence interview in Arizona, which Wallace does not write about, besides mentioning that Hal, John Wayne, and Don Gately dig up JOI’s grave to find the master tape (which must have been taken as to get it out to it’s previous victims).

Something happens to Hal to drive him into himself, which is why he appears so strange to others at the end. Swartz mentions that JOI must have created the DMZ, to go together with the Entertainment to ‘fix’ Hal, as well as the DMZ. However, I don’t find that entirely plausible, why would he want to be buried with the copy of it? I can’t recall how Pemulis got the DMZ, either. This must be of importance (as is literally every word in the book). Possibly the chapter that involves the young E.T.A students that went running through the tunnels and found the old items may alude to this too, as JOI spent a lot of time down there. However, the original title of the book was ‘A Failed Entertainment’ [4]. This would indicate why he went and created the DMZ, and almost, or succesfully, got it to Hal, as he knew that Infinite Jest failed. I’m also not convinced that A.F.R succeeded, as ONAN clearly is still existing, despite Subsidized time concluding.

I also found it very peculiur that Orin lived in Arizona, Remy and Hugh met in Tuscon, the Whataburger Invitational was in Arizona, and finally Hal attempts to go to univrsity there. What pull did that state have?

I missed several things in the novel, such as Avril’s infidelity, and I’m going to reread it, perhaps in chronological order, in 6 or so months time. I’m very much looking forward to this.